With most of the Nation, including her husband and two sons, constantly glued to the television watching the World Cup, Alison was getting fed up. If they weren’t watching it, then they were reading about it or talking about, and with still almost a fortnight to go, Alison was already at the end of her tether! She decided something had to be done about it, and whilst she couldn’t prise her family away from the football, she could at least remove herself from it, so Alison and her fellow football widows (as they had taken to calling themselves!) decided to have a garden party and declare it a strictly football-free zone! 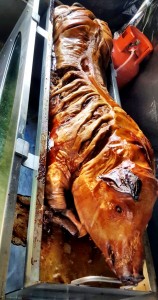 To get her own back on the footy-obsessed men in their lives, Alison and her friends decided they wanted to push the boat out and spoil themselves, so after reading some reviews about Taste The Cracklin catering for smaller private parties, she was straight on the phone to us with her menu choices! She opted for a classic hog roast served with crunching crackling and our homemade sweet apple sauce, along with potato wedges, coleslaw and a light, green leafy salad for her and her 25 guests. When Taste The Cracklin skilled Chef and nimble Catering Assistant arrived at Alison’s house, she showed us where to set up and gave us strict instructions that under no circumstances were we allowed to mention penalties, quarter finals or the name Harry Kane! So, we kept schtum and concentrated on creating a delicious buffet for the ‘football widows’!

The atmosphere in garden became very lively as the ladies arrived and they all loved our food! The aroma of the pork even dragged Alison’s husband and sons away from the TV and into the garden, and she took great pleasure in telling them they weren’t invited to the party! She relented though and let them enjoy some of Taste The Cracklin succulent hog roast too-it would have been cruel not to! Alison thanked us for great food and a great party, and we were glad to help her get her revenge on her family and have a break from football fever for a few hours!